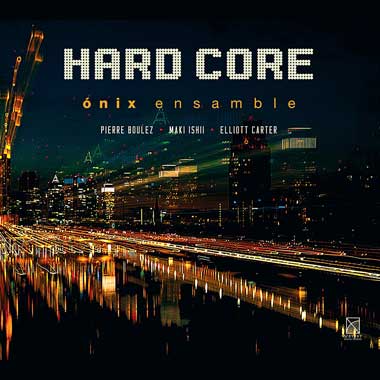 ×
Update Required To play the media you will need to either update your browser to a recent version or update your Flash plugin.

When we decided to set up Pierre Boulez’s masterless hammer (considered the most canceled work in the history of contemporary music, because many groups rent the score and when it comes to discovering all the work it requires to study it, they abandon the montage, according to the report from the editorial house), we knew that we were facing a kind of cliff, a work of great complexity at all levels, technical, artistic and expression; so that the depth of the abyss before us was seen as dark and intimidating as its nine movements, each one of exceptional complexity and virtuosity. We present on this album the version of Onyx interested in contributing to the classical repertoire of the twentieth century an original interpretation, properly Latin American. It was recorded in the year 2005, and since then it was saved, because the pieces that could accompany such monumentality were not found, and its thirty-five minutes were not enough to complete a record project in itself. It was not until recently that ONIX decided to release its version, accompanied by works performed live by composers Maki Ishii and Elliott Carter, whose interpretative contribution and compositions were similar, both aesthetically and conceptually. Hard Core requires very strong instrumental skills, not only in the level of deciphering and editing, but in the plane of what it means to give expressive meaning to a music that requires, on the part of the listener, an extraordinary attention, – listen hard core- necessary to appreciate and enjoy the innumerable contours of a sound reef full of details and complex refinements timbral, dynamic, rhythmic and harmonic.

This record is dedicated to the violinist Omar Hernández Hidalgo and to all the invited artists, who have generously been a fundamental part of the history of ONIX and contemporary concert music in Mexico.